Kevin's Discord server was created via Kevin in November of 2017 alongside Discord. Adverts were shown in three of his videos.

It's one of the main conversation places of Kevin's Fan Base. Here you will find a variety of members and will be allowed to talk about many topics such as the videos, games, cats or memes.

As of August 2020, there are over 28k Members in total. The members are split up into roles.

Kevin is the highest role on the server and is only available to the one and only Kevin. Kevin can be found to be active in chats most commonly within #video-discussion where he will thank and discuss with members about his videos along with talking in #game-chat for some videos.

The Cool Kids were a collection of Kevin's personal friends. The role was removed November 2019 and replaced with the Admin role.

Admins manage the Discord server, the moderation team, and unban appeals. There are currently two Admins, those being:

Moderators are the members of the community chosen by the Admins to help ensure that rules are being followed. They are all volunteers to help run the server and are chosen due to their activity, helpfulness and how they have acted to the rules in the past. The current moderators are:

Those interested in becoming a mod should try and be as active as possible while being polite.Anyone can be chosen for moderator and is not limited to patrons or other roles.

Twitch Moderators were added May 2020 to help keep the chat in Kevin's streams clean. Like Moderators, they are all volunteers and applied using a form that was posted in #announcements. The current Twitch Moderators are:

When a member either Joins Kevin's streams on Youtube or subscribes to his Twitch will receive the following role on his discord provided that they link their Youtube or Twitch account to Discord. This role focuses on Kevin's live streams these can either be his monthly patron streams or his public streams over on; https://www.twitch.tv/callmekevin

These roles have the same abilities as Patrons they can send links & images and access the support channels.

These are the members of the community who donate $20 or more to Kevin via patron they receive the ability to post images, links and they will have access to patron special text chats and voice chats. Super Patrons are also able to pin messages in chat.

Patrons are the lowest form of patron rank they are those who pledge $1 or more going up to $20. They have the ability to post links and images along with access to the patron chats.

These are your average user if you join without being a patron you will be assigned this role they will be unable to post links or images (this was done to avoid spam).

The welcome chat will log anyone who joins the server with a quirky message.

Before you even think about interacting with the server, READ THE RULES. Established on 11/05/2018, it reads the following:

1. Respect Everyone - Everyone is entitled to an opinion, however, if you happen to disagree with someone, be mature. If necessary, raise the issue with the moderators.

2. Hateful/Harassing Conduct - This includes (but is not limited to): slurs, racism, harassment of users, talk of suicide/self-harm, threats, or raising of any controversial topics with the intent to offend other users/groups.

3. Sexual/Inappropriate Discussion - This includes (but is not limited to): pornographic content, nudity and sexual themes/fantasies.

4. Spam - Repetitive messages/emotes/mentions, large bodies of text/ASCII, or any other messages intended to disrupt the flow of conversation will result in a warning or automatic mute. Repeat offenses will result in a ban.

5. Advertisements – The Discord server is NOT the appropriate place to advertise or self promote. (i.e other Discord Servers. If someone asks, message them privately)

6. Impersonation - Impersonating other users is not permitted and, if not changed upon request, will result in a ban.

7. Links - Posting links is a privilege exclusive to Supporters. Please keep links appropriate and suitable. Abuse of this privilege will result in punishment.

9. Language - This is an ENGLISH only server.

10. Sensibility - Apply common sense and listen to the directions of the moderators. Disagreements with moderators are to be taken to private messages

As the Moderators of this server cannot have their eyes on everything, we often rely on the responsibility of our members. As such, If you need to raise their attention towards anything please ping them using @Moderator

This Discord server makes use of a chat bot to help the moderators keep track of offenses as well as to quickly handle common issues. We try to minimise issues by banning certain words from chat but due to restrictions of this bot, we cannot ensure this system works perfectly every time. This is still a work in-progress so we ask users to please be patient as we work out ways around this. Attempts to evade this bot will result in manual moderation which may include a warning or a mute. DO NOT attempt to evade or "test" the bot.

If you break any of the rules above, you will likely be issued a warning from our bot in Direct Messages, username: “Dyno#3861” In the format: “You have been warned in Call Me Kevin, <reason>”

Users are given 2 warnings, their 3rd warning will result in a ban/kick from the server.

Should users wish to appeal to a ban, they must complete the following form: https://forms.gle/8dGKJtCeULj8zwYZ6. Attempting to evade your ban will hinder any possible chances at being unbanned.

The FAQ channel was added July 2020. Any common questions are answered here, please make sure you read through it before asking anything!

Announcements will announce anything important here you will find some of Kevin's videos being announced to @here via a bot the messages will appear ab it later than the video is uploaded so it is not instant.

This is the main area of the server, here you will find the most active chat. Chat varies and something will always be happening here.

Here you can discuss games with other people on the discord.

This is where people in voice chats will send text based messages.

These are the general voice chats.

Supporters of any kind will gain access to 9 channels, including but not limited to #supporter-creative and #supporter-pets.

The discord has spawned some user-created memes over the time and these have been pinned in the general chat. 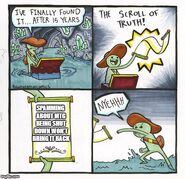 Add a photo to this gallery

Retrieved from "https://callmekevin.fandom.com/wiki/Kevin%27s_Discord?oldid=10974"
Community content is available under CC-BY-SA unless otherwise noted.